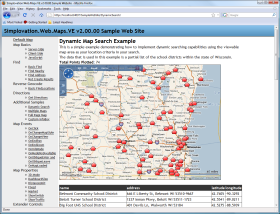 Today, I released Web.Maps.VE v2.0!! I had originally planned to release it on June 30th, but was able to reach that goal about 2 weeks early, so here we are. Web.Maps.VE v2.0 builds on top of the previous v1.0 release, and adds many new features.

Some of the key features in Web.Maps.VE v2.0 are:

There are many more features to Web.Maps.VE v2.0; go Download the FREE Trial to see for your self.

Also, if you've purchased a Web.Maps.VE v1.0 Single Website License prior to June 17th, 2008; then you may qualify for a 20% discount to upgrade to Web.Maps.VE v2.0 until August 31st, 2008. Please contact Simplovation for more information regarding this special offer for existing customers.