A couple days ago I posted some of my thoughts on the Good and Bad Parts of the Windows 7 Beta, but it was a somewhat incomplete list. So, I've decided to expand upon that list in an additional post. Why? Well, because there are some rather nice improvements worth mentioning that I didn't mention in the previous post.

Bigger Focus on the Playing Media 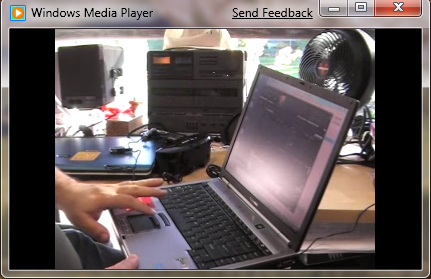 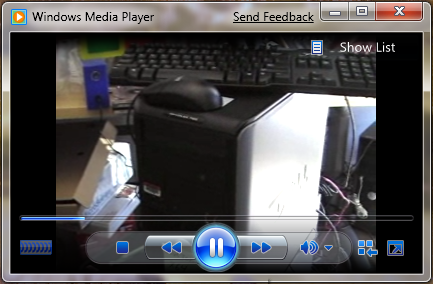 As you can see in the screenshot on the Right, the media controls overlay on top of the playing media with transparency when you hover your mouse cursor over the player. IMO, this is much better than showing the media controls all the time, since you only need to see the controls when you want to use them.

You can also double click the player, anywhere on the content that is playing, and it will toggle Full Screen mode. Alternatively you can also click the "View full screen" button/icon

on the right side of the media contols.

To view your full Media Library along with the interface for managing it, just click the"Switch To Library" button/icon

on the right side of the media controls.

Once you switch to the Library View, then you get the full user interface for managing your library. This interface is almost identical to Media Player 11, with the exception of the Treeview on the left. Instead of a Treeview on the left of the UI, there is a new set of menus on the top of the application that serves the same purpose. IMO, this offers a cleaner interface for the user. You can view a screenshot of this below. 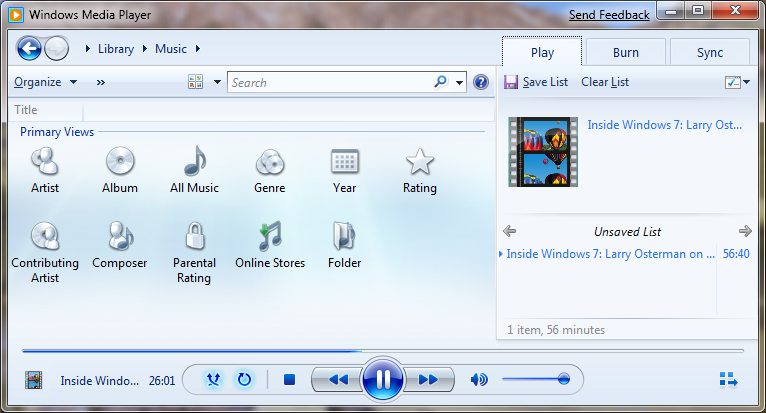 I haven't seen anything mentioning any Windows Media Player 12 support for Windows Vista or XP. Since it's shipping with Windows 7, there's no guarantee for any backward support for Windows, but I'm assuming it'll be made available for Vista. However, we shall see once this stuff RTMs.

What Happened To The "Media Player Toolbar"?

What's the alternative to the Media Player Toolbar in Windows 7 Beta? Well, actually to play/pause and skip, all you need to do is hover over the Media Player icon in the Taskbar, and the Preview Popup will contain the play/pause and skip buttons. However nice this may be, it still takes longer to pause the currently playing media (audio mostly in my usage) than just clicking a button directly on the Taskbar itself.

Oh, BTW, the video I have playing in the screenshots above is the "Windows 7 Audio - What's New" interview with Larry Osterman that is available over at Channel9.

UPDATE 01/19/2008: I added the comment about the "missing" Media Player Toolbar in the Windows 7 Taskbar.