I was looking over some of the old prototypes I've written in the past, and I can across a Simple Port Scanner that I originally wrote in VB.NET 2003. I originally wrote this back in 2004 (I think), and even posted a compiled version on my website that I have since removed/deleted. So, since it's just sitting on my hard drive collecting virtual dust, I thought I'd post it here in case anyone else can find it usefull.

Also, as you see in the screenshot below, there is a "Service" column shown in the Grid. This column tells you what Protocol/Service is normally run on that specific port. It doesn't check for that Protocol/Service on that port, but it helps as a quick reference as to what Protocol/Service may be running there. It's nice sometimes to not be required to memorize all the possible Protocols/Services that run on some of the most common ports used. This list of Port Numbers and Services is stored in th eApp.Config file.

Here's a couple download links for the source code in VB.NET 2003 and VB.NET 2008 Solution/Project files: 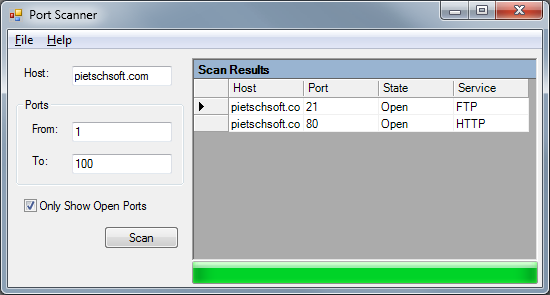