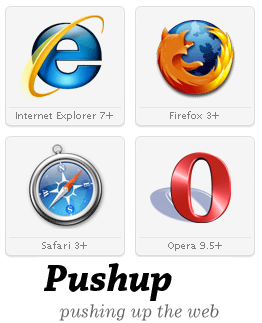 There have been a lot of talk online for a while now about the much desired demise of Internet Explorer 6, and other out dated web browsers. I don't think I've used IE6 since the first Beta of IE7, and I haven't used Firefox 2.0 since Firefox 3.0 was released. However, I can see that there are still a few users that visit this blog of whom are still using some of these OLD versions of these web browsers. So, I am joining the effort to "Push up the web" by including the script found at http://www.pushuptheweb.com in my website to kindly remind any visitor using an out dated web browser that they may want to update.

The first Anti-IE6 campaign website I was directed to was http://iedeathmarch.org where they point out the fact that there are a ton of things younger than IE6 (which was released August 27th 2001.)

For example, these things are ALL Younger than IE6:

Now, why are people still using these old browsers? Why haven't they updated to the latest, safest, most secure versions? Well, regardless the reason, it's about time.