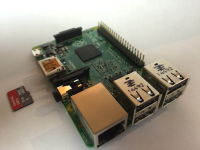 My very first Raspberry Pi arrived yesterday. I’m super excited to get playing, and frankly I probably should have gotten one of the older versions sooner. Now that I’ve got Pi, I can start hacking! Since this is a Raspberry Pi 2 (same goes for the Raspberry Pi 3!), it can run the new Windows 10 for IoT making it easy to build apps for it with C# and Visual Studio. Well, I haven’t gotten to actually building any apps yet, but was able to get Windows 10 for IoT setup.

For quick reference, the steps taken:

If you want a bigger explanation of the steps, see Scott Hanselman’s post. Thanks Scott!

Here’s a screenshot of the console installing the “flash.ffu” image to the Micro SD card: 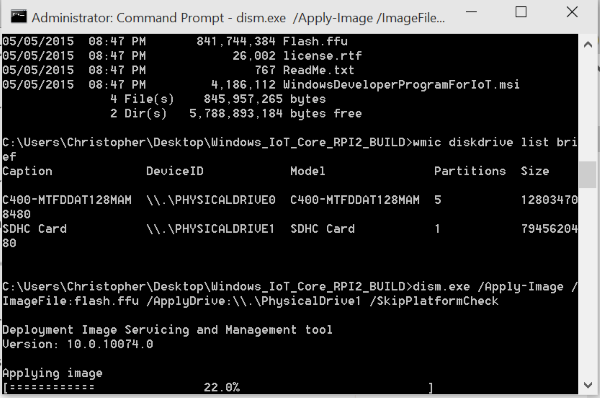 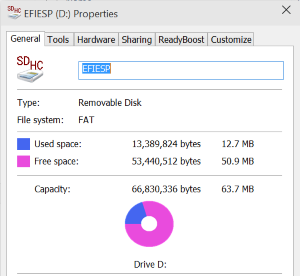 A couple questions I wondered when I bought the Raspberry Pi 2 were:

After some searching on what size Micro SD card to get I decided to get an 8GB. For a Windows machine that seems really small, but this is an IoT device after all. Plus after downloading the Windows 10 for IoT Raspberry Pi 2 build, I was able to find that the “flash.ff” disk image file was only 802MB. After installing the image to the disk, I opened Explorer to find that the total formatted disk space is 63.7MB with only 12.7MB used.

For the SD Card Speed / Class, I did find somewhere that only a “Class 10” Micro SD card is supported. Then to verify I was able to find the following Known Issue within the Windows 10 for IoT readme:

So, at least with the Insider Preview build, a Class 10 Micro SD Card is needed.

Booting up Windows 10 for IoT

Once you have the Windows 10 for IoT image on the Micro SD card, you can put it into the Raspberry Pi 2 and power it on. Make sure you connect an HDMI monitor to it so you can see the screen. Also, for it to connect to the network you’ll need to connect an Ethernet cable too.

Initially, it went though a couple different screens, including a mysterious blank screen.

Then after a couple minutes, it displayed the default screen displaying the machine name and IP Address configuration. 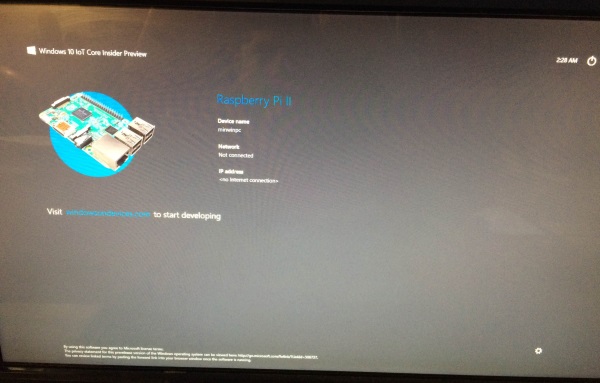 This is pretty much as far as I got on day 1. I didn’t have much time, but I just could wait to get things booted up. Now that I know it works I can start hacking soon, hopefully I’ll have time this weekend!

P.S. With the initial research and writing this blog post, I definitely ended up spending more than 10 minutes. But only about 10 minutes of it was spent on Windows 10 for IoT and Raspberry PI.